We continue our ‘history of upholstery’ series with blogpost 3 below, which covers ‘Queen Anne’ style furniture and the development of the cabriole leg. 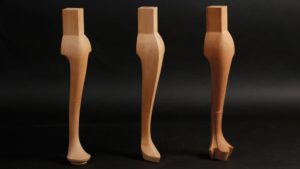 Queen Anne style furniture is a term which describes a style developed from the mid-1720s until the 1760s (during the early Georgian period), even though Queen Anne herself ruled from 1702-1714. It was influenced by the contemporary style of furniture from the Netherlands, is considered a simpler style from what had been in fashion previously, with the curved cabriole leg (see right) being the most recognisable feature of the Queen Anne style. It was also during this period/era that the precursor to the modern ‘drop in’ chair first appeared. 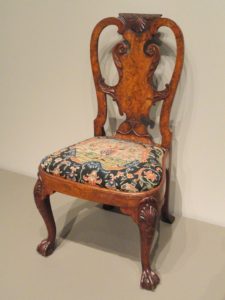 A cabriole leg is shaped in 2 curves, the upper curve being convex (curved outward) and the lower curve being concave (curved inward). The shape of the leg was based on the shape of animal legs, and Queen Anne style furniture often featured cabriole legs with a thinner ankle and a simple pad-style foot. If carvings are to be found on cabriole legs from this period, it’s often at the top of the leg, and will likely be a shell-motif carving. Similar types of motifs are to be found on chair backs/frames as well as legs, namely shell/scallop-shaped carvings and scrolls. Towards the end of the Early Georgian period (1714-1760), the backs of chairs became shorter and more varied in outline, and whilst the cabriole leg persisted, the ‘ball-and-claw’ foot replaced the earlier round, Dutch-inspired version.

Furniture from this period was often smaller, lighter and surprisingly, more comfortable than its predecessors, in part due to the increasingly developed skillsets of upholsterers of the era, with cushioned seats and wing-back armchairs becoming increasingly popular. The growth in social gatherings necessitated the need for small, moveable furniture, like the Queen Anne style / splat-back chair, sometimes called the fiddleback chair as the splat resembles the outline of a violin (see photo right – notice the shell carving at the top of the chair back), the back of which is curved in order to fit the curvature of the spine. The same social gatherings meant demand for 2-seater settees and 3-seater couches/sofas which further increased the demands for the upholsterer during the middle-to-late 18th century. 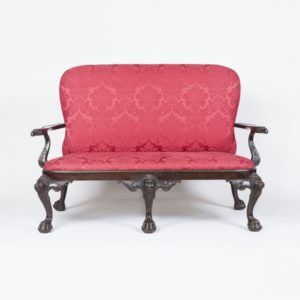 Although most furniture produced during the Early Georgian period (1714-1760) was made using walnut, the British Parliament removed import duties on timber from the colonies in 1721, stimulating the import trade in Mahogany. By the middle of the century, and towards the end of the Early Georgian period, mahogany had become the most popular wood used in furniture-making.

Mahogany became popular among furniture makers due to it being extremely strong, durable and having close-grained wood (well suited to experimenting on). The timber is less prone to infestation, doesn’t crack, scratch or warp, and doesn’t require varnishing. It’s dark red colour is also suited the design temperament of the early Georgian period. 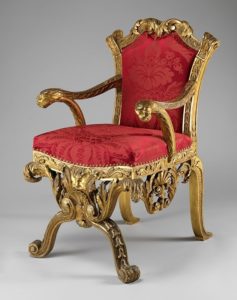 Whilst Palladian revivalism promoted by William Kent as an “acceptable English response” to continental Europe’s baroque-style excess showed a brief return to heavy, ornate, gilted furniture in the Early Georgian period, although upholstered furniture of this style was available (see picture at top of next page), Palladian revivalism was to find its popularity in architecture and large pieces of furniture in dining and entertaining/state rooms in large country homes, which did not need to be moved quickly or easily as upholstered furniture might.

It’s during this period that a wider choice of textiles were used by upholsterers, as fabrics made of silk damasks, patterned velvets, printed cotton or embroidered crewelwork became more widely available. This gave upholsterers many more options when creating furniture, and it was during the latter part of the 18th century that furniture-making in Britain truly flourished.

Wing-back chairs (known as Easy Chairs at this time) became very popular during this era, with scroll arms, high-crested backs and loose/squab seat cushions. This distinctive style of chair has become synonymous with this period.