We continue our ‘history of upholstery’ blogpost series below with our 2nd blogpost of the series, covering the mid-17th century, the development of horsehair stuffings, and ‘William and Mary’ style furniture.

After the execution of Charles I in 1649, the Royal family and most of the aristocracy were exiled in France during a period known as the interregnum (1649-1660). Upon restoration of the monarchy in 1660, Charles II took the throne (1660-1685), and the previously exiled royal court return to England from France, bringing with them a taste for all of the French and Dutch fashions of the age, and an influx of foreign cabinet-makers arrive to supply them, at which point Baroque-style furniture becomes more popular.

During this period, Walnut becomes a popular wood used for furniture production, and as a result furniture becomes lighter, highly finished and better adapted to varying needs and styles.

Also around this time, the introduction of curled horsehair for upholstery purposes is more prevalent on top of the aforementioned stitched edging / pad as a second stuffing, and as a result the bridal stitch is introduced to hold this second stuffing in place (see below), which allows soft and elaborately-shaped arms and seat cushions to be created by skilled upholsterers who understand these groundbreaking techniques. 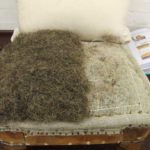 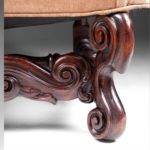 From 1660 until the turn of the century, at the height of the Baroque period, the upholstery craft is revolutionised with the invention of the daybed (a type of couch with an adjustable end, like an early chaise longue, see below, n.b. I’m aware the loose cushion in this picture is not from this particular era), upholstered armchairs, winged armchairs (see below right) and early versions of sofas with backs and arms. 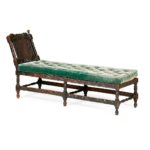 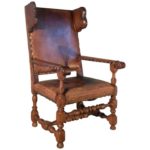 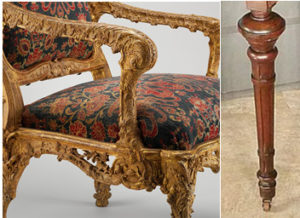 It’s during this period that carved and gilded furniture become popular, due to the unique style of the French King, Louis XIV, with intensely ornate, carved & gilded frames. The picture of the Louis IV chair seen left shows an armchair upholstered in tapestry fabric, which was quite common for armchairs of the age. Indeed, it’s around this time that velvets, silks and needlework fabric (such as tapestry and crewel) become very popular. This period also overseen the introduction of the trumpet leg in furniture-making (right), which is a type of turned leg, quite thick with curves, which flares upward and is said to resemble an upturned trumpet.

In 1688, after ‘The Glorious Revolution’, James VII & II was deposed by his daughter Mary, and her Dutch husband, Prince William of Orange. They became joint monarchs, William and Mary, and their tastes, developed from the fashions of the Netherlands at the time, ushered in an era (from around 1700 to 1725) of simpler Baroque furnishings, with the use of ornament a bit more restrained, no doubt helped in part by the fact they brought with them a number of Dutch cabinet makers. 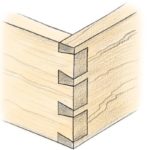 Furniture was often raised higher off the ground to emphasise the William and Mary style. This was made possible through the use of ‘dovetail’ triangular interlocking joints (see left). This changed the way furniture makers could distribute weight, allowing chairs to be made of thinner wood, which was lighter and could be made taller also.

The ‘William and Mary’ style of the age, although influenced by Baroque furnishings, the style was much less ornamental, with straight lines emphasized, and quite heavy-looking and sturdier than Baroque-style furniture, although a lot lighter and thinner than Jacobean/Caroline era furniture. Woven cane seats (see right 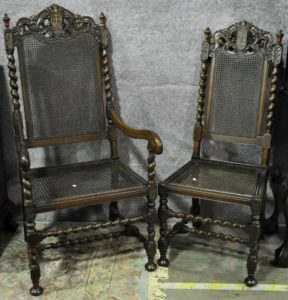 ) and heavily scrolled backs were common in chair designs, although one element of chairs that was emphasised was the elaborate woodturning of legs and uprights, as this era introduced the Spiral Leg (below). Walnut became the principal wood used for furniture in the early part of the 18th century. 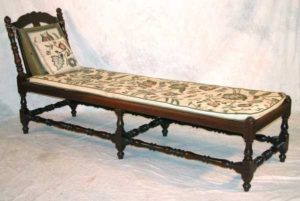 Upholstery techniques were enhanced further, with the further development of the daybed, with more emphasis on the ornamental woodturning of the age, and a cane base, with embroidered loose cushions on top of the frame to provide extra comfort (see left). Bun feet are popular with chairs of this era, and have become associated with this period as a result.

William and Mary style chairs (see below) had high backs and fairly lavish embellishments and carvings. Side chairs were most common, but armchairs were made also. Chair seats were normally made of cane, and upholstered in velvet, leather or embroidered fabric. 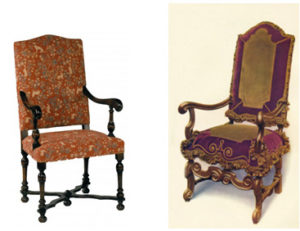 The ‘William and Mary’ style emphasised both comfort and luxury, and thus was extremely popular as a result. Although it was quickly overtaken by the styles that came afterwards (namely Queen Anne style), it’s seen as important development of the distinctive nature of British cabinet/furniture-making at the time, and helped lay the foundations of what was to follow in the later 18th century.