We continue our ‘history of upholstery’ with our 4th blogpost in the series, covering the era of industrial revolution, and in particular Thomas Chippendale, George Hepplewhite, Thomas Sheraton, and the Regency era (1812 – 1830).

The industrial revolution (1760-1820) revolutionised the textiles industry entirely. In 1764, James Hargreaves invented the ‘Spinning Jenny’ which allowed the production of multiple spools of threads simultaneously, and the power loom, which mechanised the process of weaving cloth, was developed in the 1780s (exact date unknown) by Edmund Cartwright.

Whilst wooden frames were becoming lighter and thinner thanks to stronger imported timber, this allowed upholsterers to put many layers of stuffing on chair frames to create extensive pads and cushions, from which they could create almost any shape, limited only by their imagination. Satinwood was used more commonly in the manufacture of furniture during the Late Georgian period.

From the mid-to-late 18th century, 3 men had more to do with the development of furniture-making and upholstery than any others; Thomas Chippendale, George Hepplewhite and Thomas Sheraton.

In 1754, Thomas Chippendale published his book, ‘Gentleman and Cabinet Maker’s Director’, which provided patterns for a wide range of English furniture in the French Rococo style, and its Chinese and Gothic offshoots, borrowing ornament from the French rocaille movement. Although Chippendale wasn’t solely responsible for the designs (he employed two other designers, Henry Copeland and Matthias Lock), his fame rests largely on his publication, for the effect it had on cabinet-making and upholstery for the foreseeable future.

One feature consistent in all three of Chippendale’s styles is the flow of the back legs up to form the outside contour of the backrest of the chair. All chairs have broad seats. Chippendale chair-back shapes fall into three categories. Ladder backs (see below right) have equally-spaced horizontal slats, straight or curved. Lattice backs (see below left) have fretwork or decorative carving of crossed strips of wood. Pierced splat backs (see further below) have a carved and/or pierced center splat attached at the top and bottom. 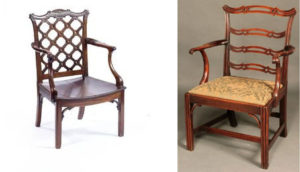 From these forms was gradually developed the Chippendale chair, with its elaborately interlaced ribbon/ribband back, its graceful arms and square (marlborough leg, see below right) or cabriole legs, the latter finishing in the claw and ball (see below left) or the pad foot, but it was still a relatively bulky/heavy item of furniture. 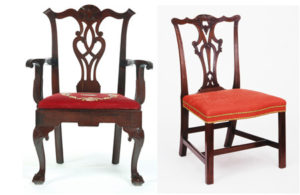 Hepplewhite, Sheraton and even the father of the neoclassical style himself, Robert Adam, all made attempts at slimming down the chair, and their combined efforts made strides towards developing the simplified, modern chair frame that we still use today. Adam’s designs made sure chairs were smaller and more delicate, with backs low and narrow and often oval in shape. The legs were generally straight and slender, replacing the use of cabriole legs. Their later work was rich in inlay of tulip-wood, satinwood, and ebony, and some of it was painted.

Adam’s designs had such a profound effect on the development of the chair that by the 1760s, even Chippendale himself had adopted aspects of the neoclassical style in his updates designs.

George Hepplewhite was both a cabinet-maker and designer, known for introducing the shield-back chair (below left) and Prince of Wales feathers motif. In 1788, Hepplewhite posthumously published his ‘Cabinet-Maker and Upholsterer’s Guide’ which popularised neoclassical styles originally developed by the previously mentioned Robert Adam. Unlike Thomas Chippendale, George Hepplewhite’s designs have fewer carvings, but his serpentine shapes for chair backs were popular. Hepplewhite chairs were noted for being simpler and more elegant. Chairs with straight, tapered legs have shield (below left), heart (below centre), and oval-shaped (below right) backs, incorporating urns, festoons, corn husk chains, and other typical Neoclassical motifs.

Thomas Sheraton produced delicate chairs of shield back form, light inlays, and sections of low relief carving which all combine to form a dedicated move away from the earlier, heavier work of Chippendale, and to some extent, Hepplewhite. In 1791, Sheraton published the first book of a four-volume series entitled The Cabinet-Maker and Upholsterer’s Drawing-Book in which he writes slightingly of George Hepplewhite’s style, although it’s widely acknowledged that Hepplewhite’s work helped to develop Sheraton’s simplified style. So, what defines Sheraton-style furniture? In overall terms, Sheraton furniture is notably lighter more elegant than both Hepplewhite and Chippendale’s respective styles. Chair backs tend to come in parlour style (below left) or square (below right). This architectural quality of the Sheraton style, common in most neoclassical furniture, is emphasized by the legs, which (while thin) tend to be straight, rounded or fluted (as per the sofa shown below – like the columns of a Greek temple). Some are tapered, and back legs are occasionally splayed. Most end in simple, unadorned feet. Sheraton furniture obeys neoclassical devotion to simple geometry, although would often be inlaid with the likes of satinwood and tulipwood for decorative purposes. Chair and sofa backs (as below) are generally rectangular in shape.

Following the neoclassical era of the Late Georgian period, came the Regency era (1812-1830), which coincided with the publication of, and was inspired by, Thomas Hope’s ‘Household Furniture and Interior Decoration’. This was called the ‘Regency period’, as the Prince of Wales assumed the regency of the country in 1811 due to his father’s long bout of mental illness. He held this position for 9 years until his father’s death in 1820, when he became king, as George IVth. This period continued to be known as the Regency period until George IVth’s death in 1830.

Thomas Hope’s furniture designs were in the pseudo-classical manner sometimes called “English Empire” It was often extravagant, but was more restrained than the later attempts of the previously mentioned Thomas Sheraton in this style. Roman, Greek and Egyptian styles were popular during this era. The introduction of Egyptian artifacts also sparked a desire to bring those elements into the Regency Period style. Motifs of ancient gods, sphinxes, lions, and griffins ornament many chairs of this era. Additionally, a revival of Eastern influence from China and Japan inspired the use of bamboo, wood carved to resemble bamboo, and lacquered finishes.

The style itself used ornamentation for its elegance, rather than rich carvings and curved lines exhibited in earlier periods of furniture design. The woodworking of the pieces generally exhibited plain lines and surfaces with slender legs and right angles. In many ways, this helped highlight the ornamentation by providing a simplistic background to avoid distraction – indeed, you could say that this period built upon the previous neoclassical style.

The components of Regency Period furniture include the selection of wood and the use of metals for accents. Mahogany remained the dominant wood for furniture design, while exotic wood like ebony was featured in many high-end pieces. Additionally, veneers of rosewood added visually striking surfaces or features to the clean lines of the style.

The addition of metal accents, gave chairs of this era an extra ornate detail that was lacking from previous periods. Cabinet-makers primarily used brass, while occasionally including bronze or ormolu (an imitation gold). Brass inlays, accents along corners and legs were popular. Sometimes the feet of legs were animal feet made of brass. Some examples of chairs from the Regency style/period are shown below: 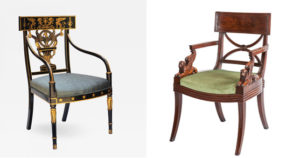