We continue our ‘history of upholstery’ series with blogpost number 5 of the series, covering the development of deep-buttoning techniques, and the use of coiled springs in furniture, as well as covering the brief ‘Gothic Revival’ period in the 1820s-1830s.

The reign of William IV (1830-1837) was a relatively short one, but from a furniture history perspective it was important, in that it marked the transition from the classical Regency Period to the more rococo-style-revival of the Victorian Era. The designs on furniture once again became heavier with greater use of carving, and this era included a gothic revival. Although it’s unknown the exact date of development, it’s from around this time that the process of ‘deep-buttoning’ armchairs, settees and other pieces of furniture gains popularity. You can see some examples of William IV’th era chairs below.

Deep-buttoning is an exaggerated version of standard buttoning. The traditional technique consists of buttons being compressed at regular intervals through a deep-filled upholstery pad, and then stitched under tension at the back. A pattern of deep-stuffed, padded pockets is then formed, often in a diamond configuration.

Any style of furniture can accommodate deep-buttoning (providing its frame allows for an upholstery pad with enough depth). Buttoning is generally found on the ‘inside back’ fabric of furniture but can be used on seats, arms, padded borders and rails if so desired. Traditional chesterfield sofas are a great example of this deep-buttoning effect.

It is very important to get the fabric in the right position in relation to the buttons, folds and seat fabric. Any pattern mismatches will be intensified by this technique, which is why plain fabrics are deemed a better choice. A photo of a traditional chesterfield-style sofa with deep-buttoning is below: 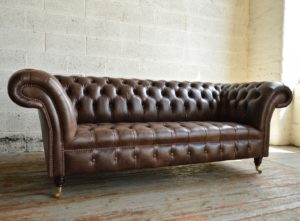 Although the exact date of usage commencing is unknown, it’s thought that it’s around this period that coiled metal springs are used in upholstered furniture for the first time. Although they were available to use from towards the end of the 18th century, their high cost and upholsterers not yet understanding how to best use them made them an impractical material for use until the middle of the 19th century.

Upholsterers would initially use loose coiled springs in seats and chairs, but the springs would move and fall out of place over time, leading to a very uncomfortable and lumpy seating arrangement. Further advances in steel-making made coil springs more economical to use than solely using horsehair, feathers and other natural stuffing materials in a traditional stitched and stuffed seat/chair.
Advances in tying techniques, hand-stitching them in place tightly at the base to the seat webbing with twine, and then tying the springs together with cord or twine, made the springs move as one piece in a solid unit, and later, more resilient springs were developed which would return to their original state after compression, unlike the earlier versions. All of these factors were important to introduce the regular usage of coiled springs in upholstered furniture. You can see an example of the dome-shaped seating arrangement created through the use of tied coil springs, in the picture below: 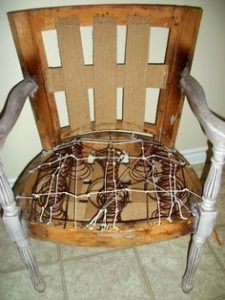 The first British patent registered for using coil springs in upholstered furniture was by Samuel Pratt in 1826, and in 1834 John Samuel Crofton published a book entitled ‘The London Upholsterer’s Companion: The Art of Spring Stuffing’, showing that as a method its popularity was growing.

Crofton, an experienced upholsterer, describes using 9 circular steel coil springs seven inches high by three and a half inches wide, made of number 8 charcoal wire, for upholstering easy chairs. His book also describes spring-upholstered sofas, beds, mattresses, pillows, and their use in many other applications. Crofton notes that coil springs have, “been in the trade a number of years” (sic) indicating the original date of the practice is unknown.

Crofton writes in his book, “In manufacturing spring-stuffed seats, it is necessary to web and bottom on the under side and action of the springs. The seat represented in the design requires none springs–seven inches high, and three and a half over, and these springs be made from No. 8 charcoal wire; sew them firmly to the seat, equi-distant (sic), but not too near each other; having done this, tie them together, using the greatest precaution in doing so, in the first place, that they may be made to assist in action; and, in the next, that they may be kept perpendicular and act freely, upon which most essentially depend on the ease of the seat, and the durability and style of workmanship; then fasten the ends of the twine, with which the springs are tied, to the frame of the chair.”

Today, furniture with coil spring seats are considered much better quality and are more comfortable compared to those made with zig-zag style springs, or worse, no springs at all. The labour involved in creating a coil sprung seat is intensive, which often leads to a more expensive piece of furniture; however, it also provides a more supportive and comfortable foundation, and in theory should last longer than any other method.

In the 1820s-1830s, a brief Gothic revival period occurred, thanks to the popularity of romantic novelists such as Sir Walter Scott. It existed alongside the neoclassical styles of the Regency period, as tastes in architecture, furniture and fashions became less uniform across all spectrums of society and competed with one another for popularity. The gothic revival era produced upholstered furniture that used contemporary cabinet maker techniques such as woodturning and using lighter frames to produce a medieval-looking piece of furniture. Below are some examples of Gothic revival style chairs.