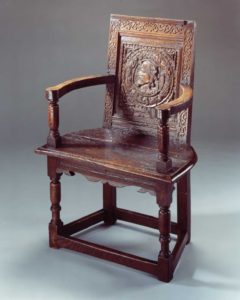 We are going to explore the history of upholstery in a series of blogposts, which will detail the development of modern upholstery techniques from the 16th century onwards. Below you’ll find our first blogpost in the series.

The foundations of what we now know as ‘upholstery’ in the modern era were laid in the Elizabethan era in the late 16th century, when crude forms of stuffed chairs became more common as replacements for wooden stools, which were more commonly used at the time. A stuffed layer of loose grass/hay, feathers or animal hair were held on top of a wooden platform by a single layer of decorative top fabric or animal hide, and some tacks/nails.

During this period there was a considerable and fairly widespread increase in domestic comfort, to be seen in improved construction of furniture, multiplication of types, and the tentative beginnings of upholstered furniture.

Furniture of this era was normally very large, made of heavy British countryside timber (normally oak, but also ash or elm), with carved decoration, and could only generally be afforded by the aristocracy. Due to the high cost, only the head of the household would own a chair, with most others using stools to sit on. Chairs with high and narrow backs and square seats are often thought of as being ‘Elizabethan’ (see above), even though this style pre-dates her reign in England (from 1558-1603). The style was very much still in keeping with ‘Gothic’, and although the Renaissance period was well underway in continental Europe (which had a pronounced effect on the design of furniture), it took much longer for its influence to spread to the furniture and cabinet-makers of the British Isles. 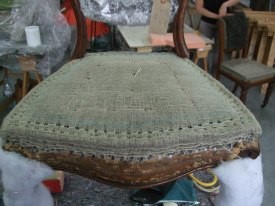 During the reign of James VI & I (1603-1625), the Baroque style emerged, and stitched edging appeared (see left), meaning bespoke shapes could be created by stitched cushion pads on wooden frames, allowing for the first time design and artistic flair to become a hallmark of upholstered furniture of the age. Farthingale chairs (without arms, see below) were introduced, due to the popularity at the time of the large hooped skirt from which the chairs take their name. The use of velvet in upholstered furniture becomes popular. 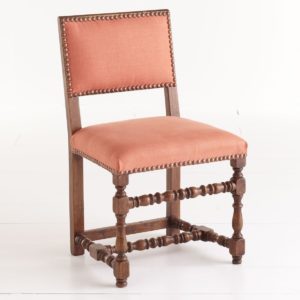 During the reign of Charles I (Caroline Era), the Baroque style took hold in mainland Europe, and this style remained popular into the 18th century. It was characterised by the use of abundant ornamentation in furniture, and was initially promoted by the Catholic church as a response to the Protestant reformation, which perhaps explains why this style very quickly became popular in France, Spain and Italy yet Northern European nations and the British Isles took a lot longer to warm to Baroque-style furniture. England eventually adopted a lot of baroque-style furniture during this period, as a maritime nation with expanding trading links to Asia, heavy tropical woods were imported which allowed furniture of this style to be created, as well as Asian decorative techniques becoming fashionable. 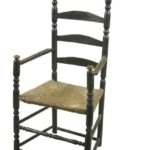 Also during this period, although their origins were thought to be in the early 16th century, that ladder/slat-back chairs (see left) became very popular. This type of chair has a tall back constructed of horizontal slats or spindles between the two uprights, a very simple/practical chair design/style.