We continue our series of blogposts covering the history of upholstery, with number 7 in the series below, covering the Art Deco movement, Bauhaus and the development of functionalist modern/modern upholstered furniture.

The Art Deco period emerged after World War 1. The deprivations of the Great War years gave way to a whole new opulence and extravagance that defined the Jazz Age and the Art Deco aesthetic. Art Deco was not a single style, but a collection of different and sometimes contradictory styles. The actual phrase “Art Deco” did not appear in print until 1966, when it featured in the title of the first modern exhibit on the subject, called Les Années 25 : Art déco, Bauhaus, Stijl, Esprit nouveau, which covered the variety of major styles in the 1920s and 1930s.

The movement, prevalent from the 1920s until roughly the start of World War 2 in 1939, took its name from the 1925 Exposition Internationales des Arts Décoratifs et Industriels Modernes, held in Paris, and is characterized by streamlined and geometric shapes. The Hôtel du Collectionneur was a popular attraction at the Expo; it displayed the new furniture designs of Emile-Jacques Ruhlmann, who many believe to be Art Deco’s finest artist/designer. The interior design of the hotel followed the same principles of symmetry and geometric forms which set it apart from Art Nouveau, and bright colors, fine craftsmanship and expensive materials which set it apart from the strict functionality of the Modernist style. Art Deco has since become associated with both luxury and modernity; it combined very expensive materials and exquisite craftsmanship put into modernistic forms. By the 1930s, the style had been somewhat simplified (due to the economic complications of the Great Depression), but it was still extravagant.

It also utilized modern materials like chrome, stainless steel, and inlaid wood. Art Deco featured bold shapes like sunbursts and zigzags and broad curves. A distinctive Art Deco period piece of furniture is the ‘Barcelona chair’ (also Functionalist Modern) by Bauhaus designer Ludwig Mies van der Rohe, seen below right, as are the Ruhlman armchairs (below left), which are shown alongside other pieces of Art Deco style upholstered furniture, below. 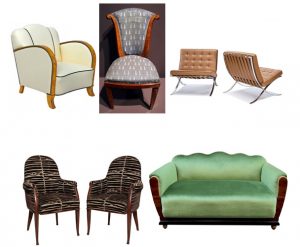 Around 1925, a new rationality took hold in the world of furniture design, and this style became known as Functionalist Modernism. This was encouraged by the emergence of the works and theories of the Bauhaus (translates as “building house”), a revolutionary German school of arts and crafts (established in 1919 and staffed by leading architects, designers, and painters until the Nazis closed it in 1933). Bauhaus used crafts as experimental techniques and trained students to design for mass production. Low price levels, maximum utility, good quality, and simple, clear forms were considered essentials of well-designed consumer goods. Although the school closed in 1933, the staff continued to spread its ideals as they left Germany and emigrated all over the world.

After the end of World War 2 (in 1945), simple, sleek furniture designs were influenced by artists and designers with roots in Germany; (Bauhaus’ Marcel Breuer), Spain (Lilly Reich, from Germany), France (Eileen Gray, from Ireland), and Japan (Isamu Noguchi); chairs representing basic seating needs combined with artistic designs became very popular in this era. The austerity of the postwar era enforced a simplicity that meant as a devastated Europe was being rebuilt, people accepted the need for cheap, simplified furniture.

All furniture design was influenced by the social and economic trends of the era: formal living declined; the mechanisation of household tasks expanded; living spaces shrank, and with more machines in the home, it meant chairs were required to adapt to the new norms of 20th century living. They became smaller, lighter, mass-produced and easier to maintain.

The celebration of modern technology and progressive design was the most effective accomplishment of the Bauhaus. Forms, colours, and materials previously confined to shops and factories were introduced into homes and offices with considerable stylishness. Materials such chrome-plated metal tubes, ‘Bakelite’ and other man-made materials were commonplace . Much of the furniture used from the 1950s onwards in reception rooms, kitchens, or dining areas derived from Bauhaus originals. The availability of wood in Scandinavia led to similar rational, modern furniture, using a variety of laminating techniques (and the broad acceptance of this led to contemporary mass-produced furniture from the likes of Swedish company Ikea). We have some examples of functionalist-modern-styled upholstered furniture below.