This is the first in a series of blogposts exploring 20th Century Upholstered Furniture Design and Designers, and in this first blogpost we’re going to highlight the Art Nouveau, Edwardian and Art Deco periods.

Appearing from 1890 to 1910, Art Nouveau was a very distinct, decorative style that became popular, bridging the Victorian and Edwardian eras. The term ‘Art Nouveau’ means “new art” in French. In essence, it was a desire to create a new style for the coming 20th century, and a conscious attempt to abandon any notion of the dated, revivalist styles of the past. It embraced the new industrial aesthetic rather than challenging it. It features naturalistic but stylized forms, often combined with more geometric shapes, particularly arcs, parabolas, and semicircles.

The Art Nouveau movement (1890 – circa 1910) focused on a desire for quality craftsmanship in an age of growing industrialization and mass-production, spurred on by key modernist thinkers in the arts, such as William Morris. Henry Van De Velde, a Belgian architect and designer, is largely credited with being Art Nouveau’s chief promoter, but because it emerged over a brief period of time in so many places, Art Nouveau was known by different names. For example, it was called “Glasgow Style” in Scotland thanks to the influence of prominent designers like Charles Rennie Mackintosh, although some say that the peculiarities of his particular designs were a variant of Art Nouveau, rather than Art Nouveau proper.

Art Nouveau furniture was often made of hardwoods, especially walnut, oak, and teak. Art Nouveau furniture was popular, but it never completely superseded other furniture styles, because it was expensive to produce and required a high level of skill. The furniture’s most distinctive elements, long elaborative curves, and twists, had to be done by hand. The result was a style that most people couldn’t afford.

Art Nouveau fell out of favour before the start of World War 1 (1914-1918), so it was relatively short-lived. But it proved very influential, and is sometimes called the first ‘modern style’. Below we have some examples of Art Nouveau period chairs.

Whilst Art Nouveau pieces were expensive and popular amongst the upper classes (focussing on design, ornamentation and craftsmanship), Edwardian furniture was smaller in scale and the designs were simpler, making them cheaper to produce and easier to fit in the more modest home. Edwardian furniture became popular with the middle-classes as a result.

It was perhaps the first attempt at mass production in upholstered furniture, and as a result laid the foundations for the later modernist era. Below is shown an example of a pair or Edwardian armchairs. 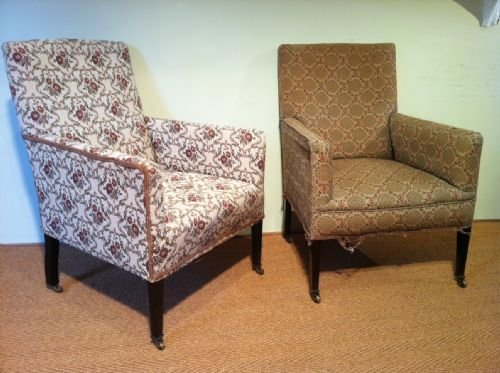 The Art Deco period emerged after World War 1. The deprivations of the Great War years gave way to a whole new opulence and extravagance that defined the Jazz Age and the Art Deco aesthetic. Art Deco was not a single style, but a collection of different and sometimes contradictory styles. The actual phrase “Art Deco” did not appear in print until 1966, when it featured in the title of the first modern exhibit on the subject, called Les Années 25 : Art déco, Bauhaus, Stijl, Esprit nouveau, which covered the variety of major styles in the 1920s and 1930s.

The movement, prevalent from the 1920s until roughly the start of World War 2 in 1939, took its name from the 1925 Exposition Internationales des Arts Décoratifs et Industriels Modernes, held in Paris, and is characterized by streamlined and geometric shapes. The Hôtel du Collectionneur was a popular attraction at the Expo; it displayed the new furniture designs of Emile-Jacques Ruhlmann, who many believe to be Art Deco’s finest artist/designer. The interior design of the hotel followed the same principles of symmetry and geometric forms which set it apart from Art Nouveau, and bright colors, fine craftsmanship and expensive materials which set it apart from the strict functionality of the Modernist style. Art Deco has since become associated with both luxury and modernity; it combined very expensive materials and exquisite craftsmanship put into modernistic forms.

By the 1930s, the style had been somewhat simplified (due to the economic complications of the Great Depression), but it was still extravagant. It also utilized modern materials like chrome, stainless steel, and inlaid wood. Art Deco featured bold shapes like sunbursts and zigzags and broad curves. A distinctive Art Deco period piece of furniture is the ‘Barcelona chair’ (also Functionalist Modern) by Bauhaus designers Lilly Reich and Ludwig Mies van der Rohe, seen below right, as are the Ruhlman armchairs (below left), which are shown alongside other pieces of Art Deco style upholstered furniture, below.